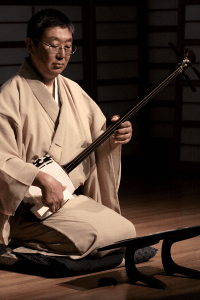 Aoki was born in 1957 in Tokyo, Japan into an artisan family called TOYOAKIMOTO, traditionally categorized as OKIYA, meaning a booking and training agent for Geisha ladies in downtown Tokyo’s designated area. While the economy and social environment forced many of those traditional artisan family business to close down in the 60’s, Aoki was luckily able to receive some of the important essence of traditional Tokyo Geisha cultural training and studies at age 4, and became a part of the performing crew in early childhood. After his grandmother passed away, he had kept on with the Tokyo music training until early teens, and shifted his musical focus to American pop music and experimental music. Since his biological father was a movie producer at Shin Toho Studio, he had also began working in small gage films and started to produce experimental films.

Aoki was an active performer during the early 70’s in the mist of Tokyo Underground Arts movement. He became a member of the Japanese Experimental Music ensemble, GINTENKAI presenting mixture of traditional music and new western music. After coming to the U.S. in 1977, Aoki studied experimental filmmaking at the School of the Art Institute of Chicago. He is currently an adjunct Full Professor at the Film, Video and New Media Department, and teaches film production and history courses. During the late 80’s, Aoki became a leading advocate for Chicago’s Asian American community and one of Chicago’s most in-demand musicians on contrabass, taiko (Japanese drums) and shamisen (Japanese lute).

To this date, Aoki has produced and appears in more than 90 recording projects and over 30 experimental films and he has been working internationally. He is one of the most recorded artists in Chicago music scene.